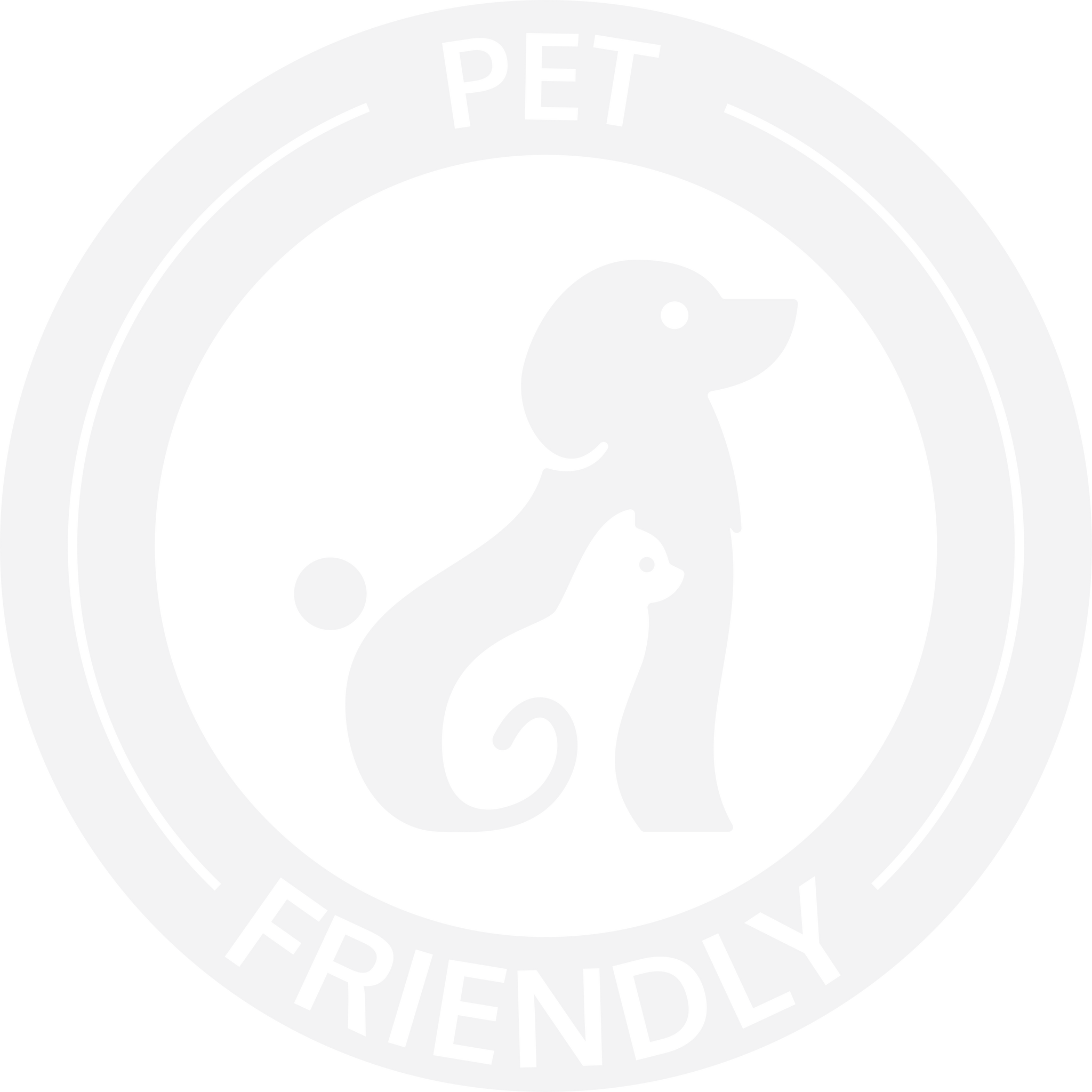 Built in the late 1980s as a private getaway home, it now welcomes guests from around the country. A restored farm stay offering 4 hideaway rooms and a luxurious tent set amidst lush green acres of land. The architecture is influenced by colonial times and the early 20th century with its mud and tile roof that is believed to keep spaces cool during the summers and warm and snug during the winters.

Experience a bit of rural-urban India where lush farmlands rich with seasonal produce, surrounded by an abundance of flora and fauna, birds and animals abound.

Tree of Life Dak Bungalow, Dera Bassi is at a scenic drive of 4 hours from New Delhi and a convenient drive of 25 minutes from the city of Chandigarh. 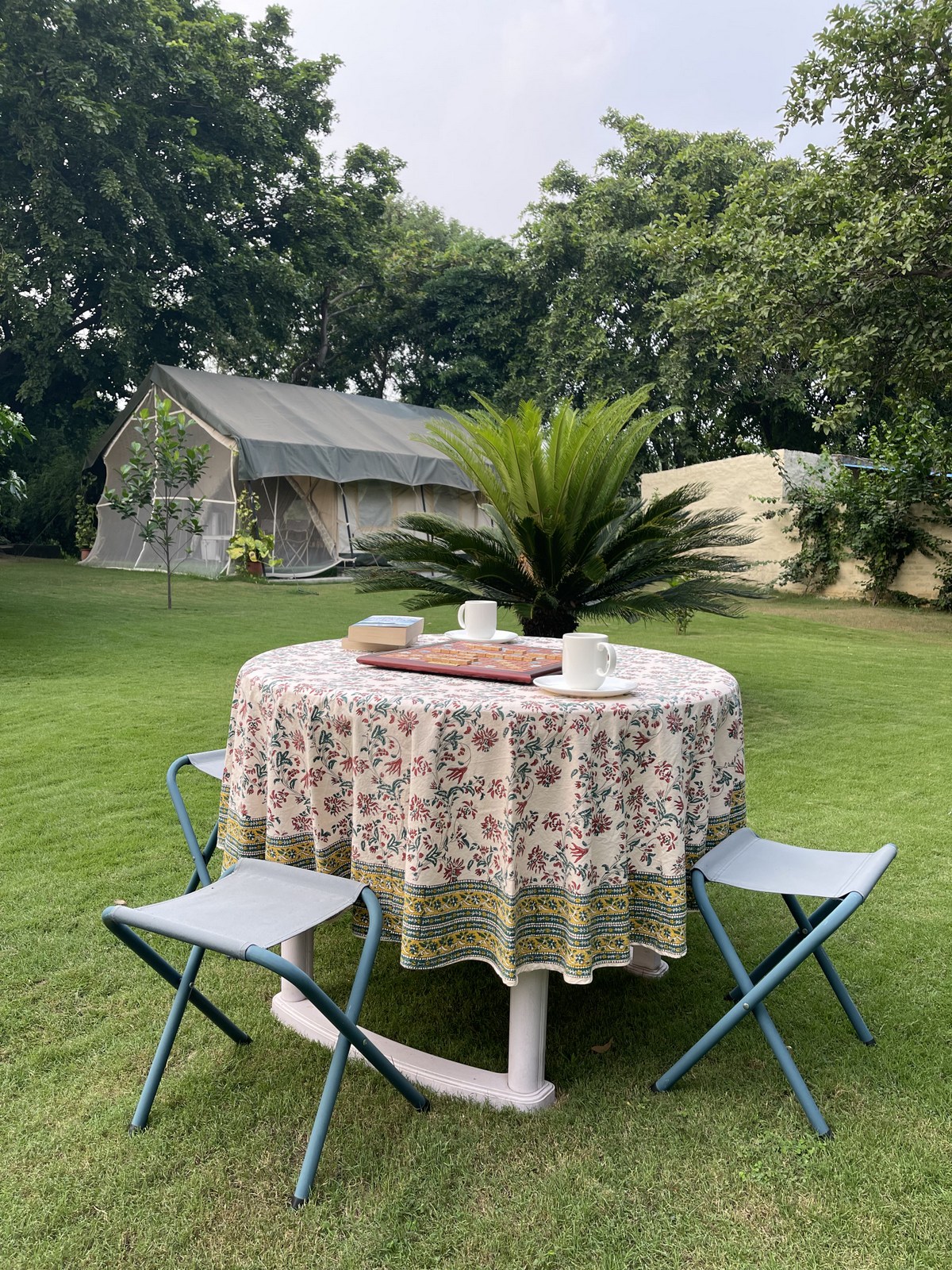 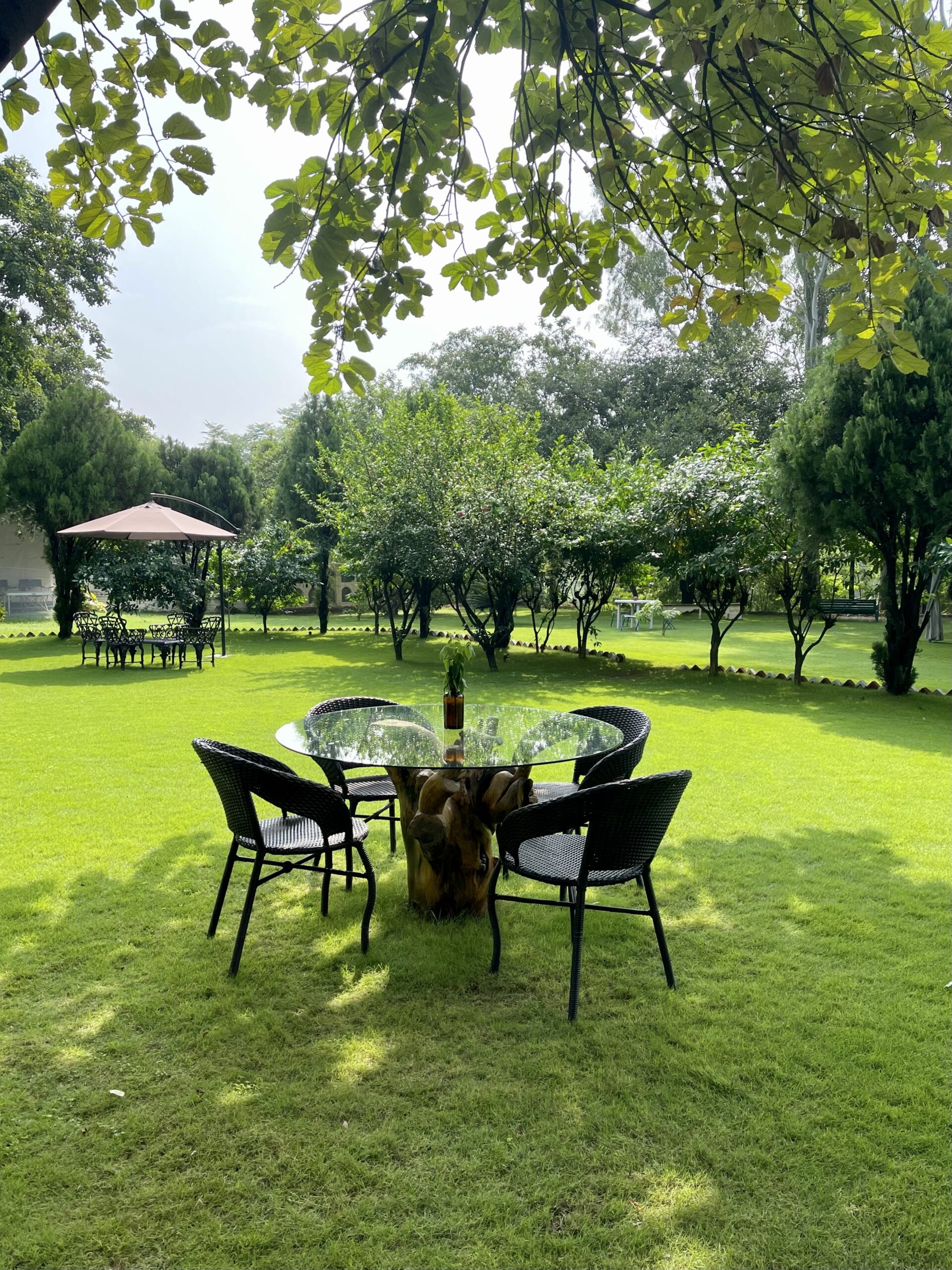 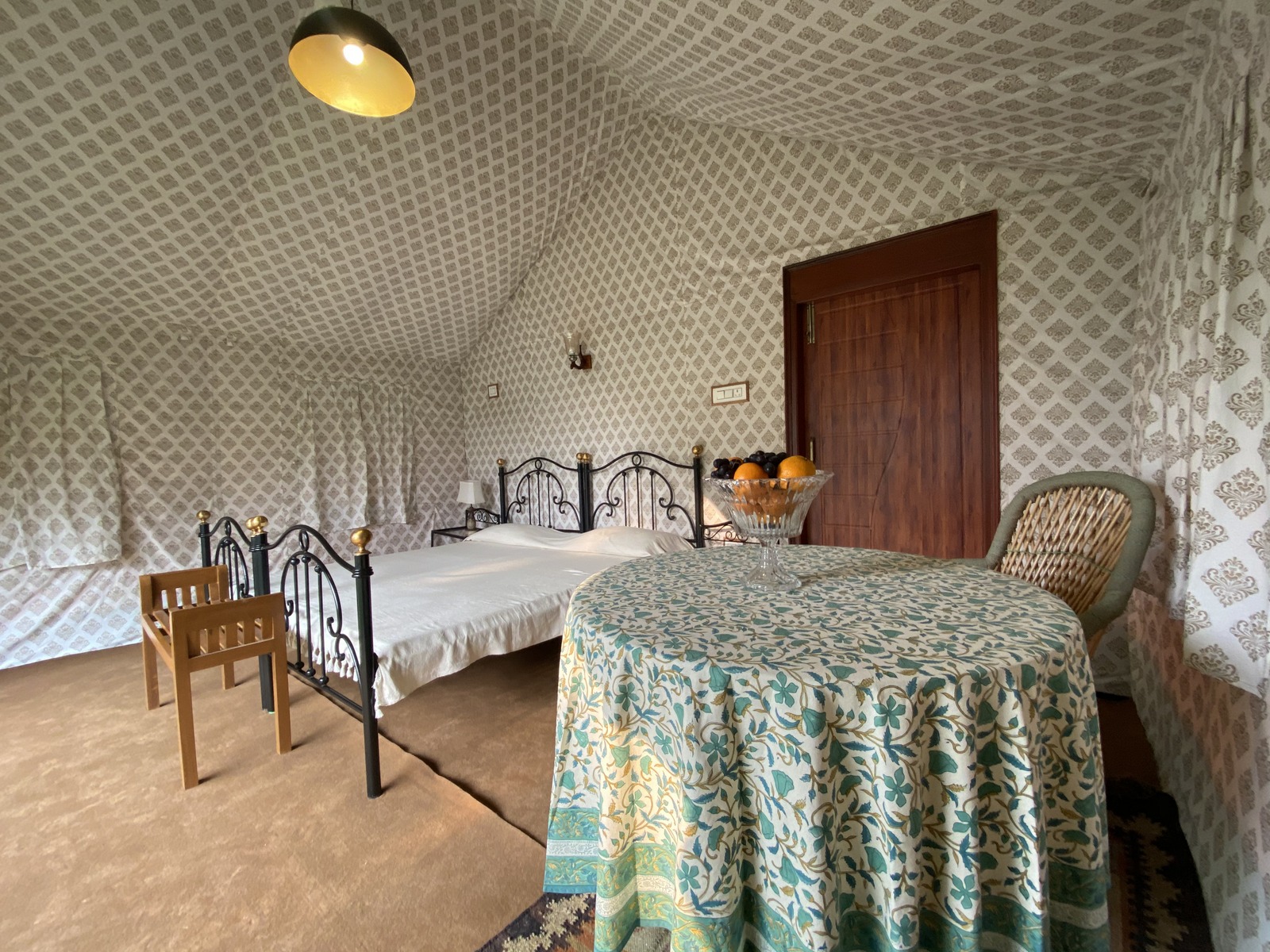 The accommodation built as a farm stay offers 4 hideaway rooms and a luxurious tent. Every hideaway is furnished with ample lounging space and offers a private verandah, air-conditioner, and other necessities.

Joys at Tree of Life 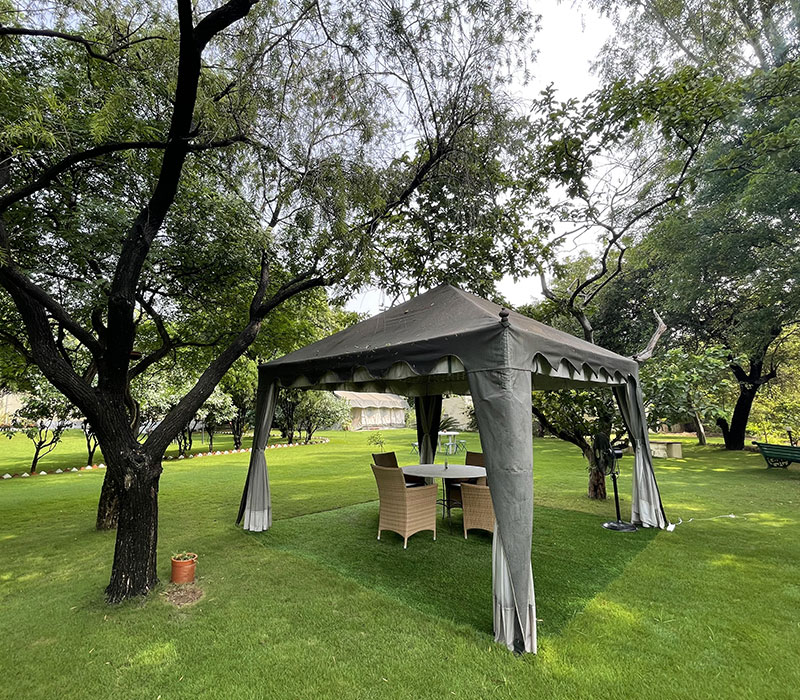 OUTDOORS
Gazebo on the Greens
Curl up with that book; hear the symphony of birds at sunrise or sunset; sip your favourite drink over banter – just that place for a few unwinding hours! OUTDOORS
Rural Farm Experience
An exclusive farmstay with just four rooms, Tree of Life Dak Bungalow, Dera Bassi brings the best of Punjab’s green heart to you in the pristine setting of lush fields, as far as the eyes can see. The best part of a farmstay you ask? The food! Prepared from freshly sourced produce from our own fields and our neighbours. 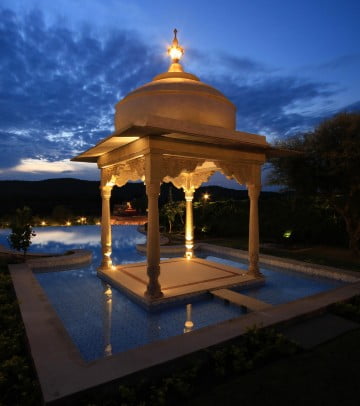 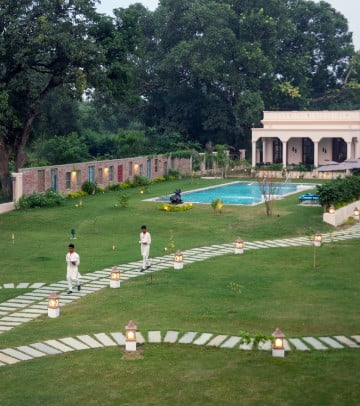 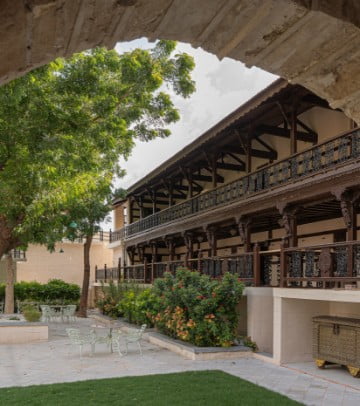 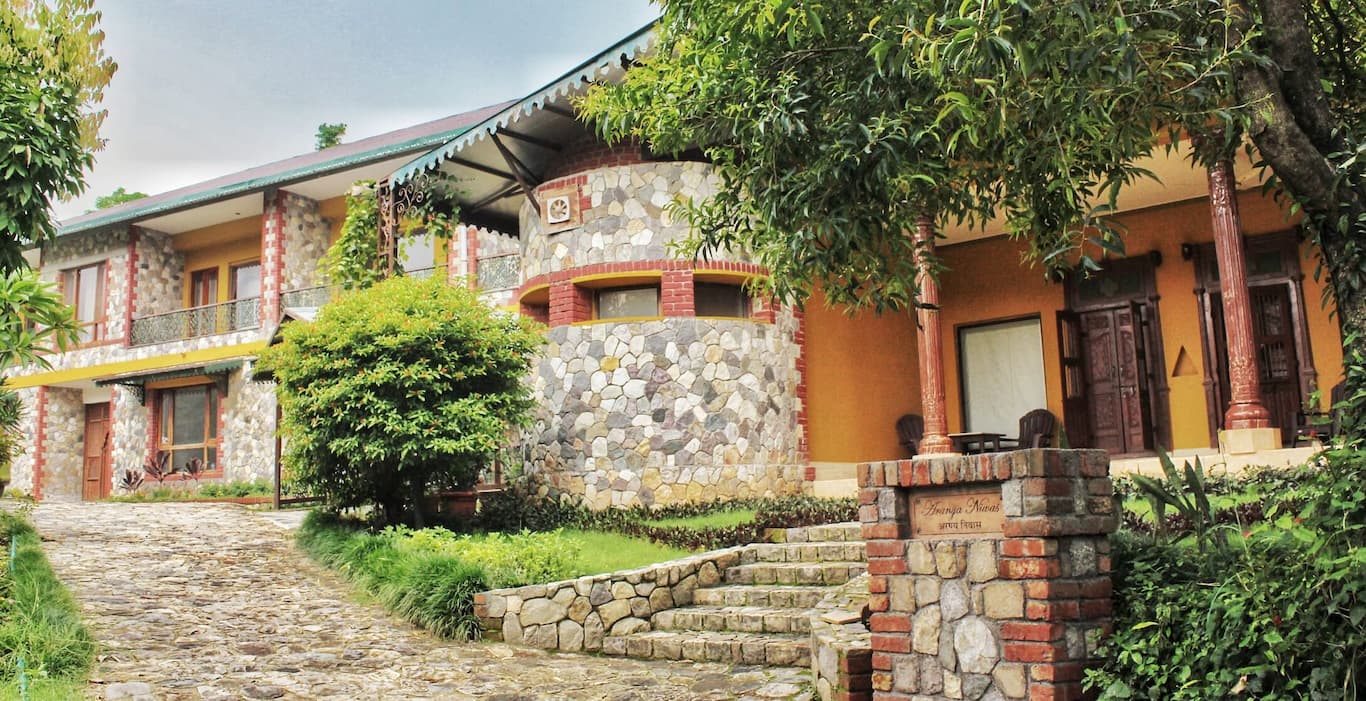 how to get here?

BY ROAD : The Tree of Life Dak Bunglow, Dera Bassi is 250
kms from Delhi and a convenient under 5 hours drive. The route
takes you Delhi – Murthal – Panipat – Karnal – Ambala : we are
short of Zirakpur. We are also very conveniently connected from
all cities from Punjab.
Please Google our location for specific
directions.

BY TRAIN : Chandigarh is the nearest Railway Station and is 15
kms from the Tree of Life Homestead. Transfers can be arranged
from here. 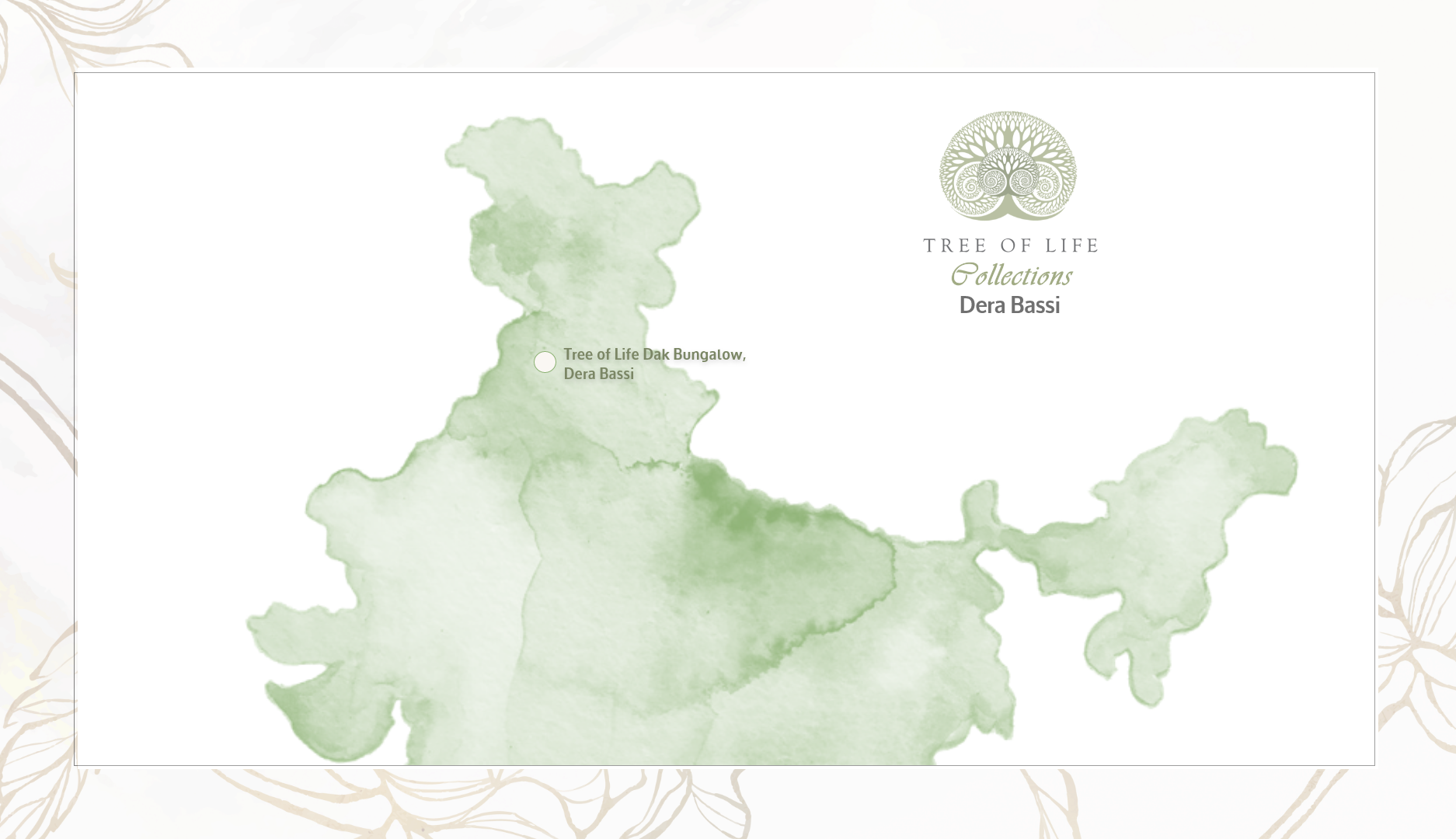 No request is too great no detail is too tiny. Connect with us to experience the Joys at Tree of Life

make it an itinerary

Tree of Life Resorts offer a discerning traveller a utopia far removed from the pressures of everyday living, and a chance to enjoy the essence of authentic India: her friendliness, hospitality and serenely balanced lifestyle.

MUSSOORIE This beautiful property offers you 17 rooms and Junior Suites, backed by a warm and caring service. explore HOMSTEAD A calm and serene getaway on 170 acres of land, a destination with it’s own 6 hole golf course and a private airstrip explore

VANVILAS A luxurious accommodation with 6 hideaway and river-view rooms is located in the fabled Kumaon district at the foothills of the Himalayas . explore AGRA A one of a kind experience makes its way to the City of Taj, Agra. A destination built using shipping containers which have seen a lifetime of the high seas. explore

DEHRADUN Set amongst the green forest reserve, tucked away far from the noise and chaos and yet just a convenient 8 kms away from the city centre Dehradun Foothills explore

Joey B
If you are travelling to the Shivaliks this is a must! Tucked away amidst the trees on a less traveled road is The Dak Bunglow at Dera Bassi. It was introduced to us by a friend and we’ve been there twice n both the times it left us fulfilled.A mix of the forester bungalow with a touch of the Raj rustic charm. Sprawling laws beautiful trees and fire flies surround the property.
Olivier
The Dak Bungalow is one of my favorite places to visit. I've been coming here for years and what I particularly love about the place is that time seems to stop here. With its colonial charm and rustic peacefulness, it's a wonderful getaway from the stress of daily life and a beautiful space to connect with nature and yourself. The food is refined and sumptuous, the rooms well appointed and the hosts go out of their way to make it a memorable stay. If you want a weekend that combines luxurious tent living, classic cocktails, delicious cuisine and routine sightings of exotic birds and animals, this is the place for you!
Ravi
The Dak Bungalow is off the beaten track in a rural area. You enter the compound and discover a manicured lawn filled with numerous shade-giving trees. A gazebo, a veranda, a dining room on the grounds, and tables and chairs dotted here and there all make the setting even more inviting and ideal for enjoying the scenery.

Facebook-f
Instagram
Linkedin-in
Vimeo-v
Copyright © 2022, Tree of Life Resorts Pvt. Ltd. All Rights Reserved. | Crafted by PNJXN
We use cookies on our website to give you the most relevant experience by remembering your preferences and repeat visits. By clicking “Accept All”, you consent to the use of ALL the cookies. However, you may visit "Cookie Settings" to provide a controlled consent.
Cookie SettingsAccept All
Manage consent

This website uses cookies to improve your experience while you navigate through the website. Out of these, the cookies that are categorized as necessary are stored on your browser as they are essential for the working of basic functionalities of the website. We also use third-party cookies that help us analyze and understand how you use this website. These cookies will be stored in your browser only with your consent. You also have the option to opt-out of these cookies. But opting out of some of these cookies may affect your browsing experience.
Necessary Always Enabled
Necessary cookies are absolutely essential for the website to function properly. These cookies ensure basic functionalities and security features of the website, anonymously.
Functional
Functional cookies help to perform certain functionalities like sharing the content of the website on social media platforms, collect feedbacks, and other third-party features.
Performance
Performance cookies are used to understand and analyze the key performance indexes of the website which helps in delivering a better user experience for the visitors.
Analytics
Analytical cookies are used to understand how visitors interact with the website. These cookies help provide information on metrics the number of visitors, bounce rate, traffic source, etc.
Advertisement
Advertisement cookies are used to provide visitors with relevant ads and marketing campaigns. These cookies track visitors across websites and collect information to provide customized ads.
Others
Other uncategorized cookies are those that are being analyzed and have not been classified into a category as yet.
SAVE & ACCEPT
CLOSE

Joy of Workations Book your workation and experience #JoysAtTreeOfLife and the uncompromising comfort and convenience, even as your loved ones immerse in pure leisure. explore

Joy of Workations Book your workation and experience #JoysAtTreeOfLife and the uncompromising comfort and convenience, even as your loved ones immerse in pure leisure. explore